Summary: Seymour Flux. The Fayth Cluster. Mindfuckery dialed up to 11 in dream!Zanarkand. I have many, many questions.

-The next area is the Mt. Gagazet “Prominence.” I haven’t heard that word used in geographic terms before, but probably means something showing out, maybe an open cliff face or summit.

-Rikku and Tidus haven’t had any luck yet. They shouldn’t keep this to themselves. They’re the two least experienced people in the group with pilgrimages. They should ask for help!

-This is a cute relationship they’re developing. 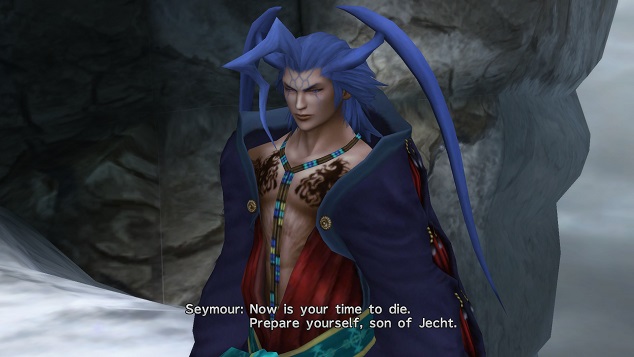 -I’m not sure of this at all, but I don’t think this is really Seymour. He appears so randomly, in his original form, with no back-up, just saying “Time to die!” Doesn’t make sense. I think he’s more likely some kind of trial put forth by the mountain. An ordeal. [Later edit: this is possibly my shortest-lived theory ever in this series.]

SEYMOUR: “Allow me to say something to the last Ronso before I leave.”

Ok, I no longer believe he’s artificial. I think it’s the real Seymour.

-What does he mean by “last Ronso?”

“Yours was… truly a gallant race.”

Oh fuck. Fuck fuck fuck. The Ronsos said they’d guard our flank. Did Seymour commit some Kefka-esque act to wipe them out? He’s powerful enough that he probably didn’t even need to resort to something like poison.

-He gleefully recounts how they through themselves at him to bar his path.

-DUDE, HARDLY ANYONE ELSE BELIEVES IN YOUR WHOLE “DEATH IS NECESSARY RELEASE” THING 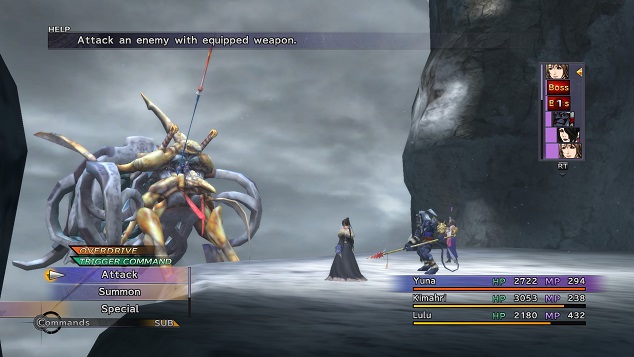 -It looks like he’s been junctioned onto Mortiorchis, the way that Ultimecia junctioned herself onto Griever in FFVIII.

-He uses Zombie and “Full Life.” A deadly combo.

-Bringing in Yojimbo. A nice Wakizashi before he’s banished.

-Bahamut lays into this punk with a 33k Mega Flare.

-Summons are really doing work this fight. I didn’t even get to attack with every party member. Energy Blast, MegaFlare, and Seymour Flux goes down easy. 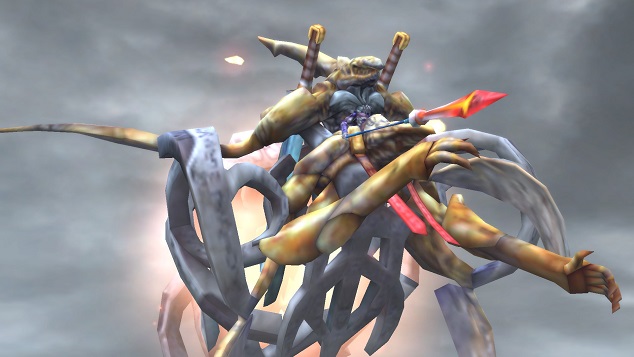 -Seymour’s words have really got into Yuna’s head. She now knows something about Jecht and Sin… and Tidus spills the truth. Jecht is Sin.

LULU: “You’d fight your own father?”
TIDUS: “Yeah. No problem there.” Heh.

-I’m glad the truth is out there now.

-Auron says we’ll learn more when we arrive. Soon. I don’t doubt it.

-Got the Saturn Crest.

-WHAT THE FRESH HELL 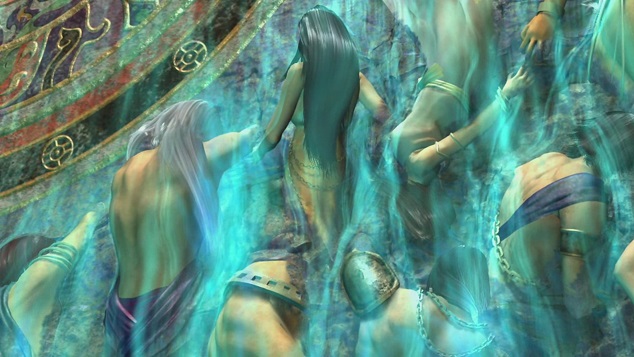 -Some sort of gate with fayth etched into them. Someone is using fayth and drawing energy from them all.

-Screen flashes to white as Tidus touches the bodies in the gate. Huh?

-Dream time. He’s back in Zanarkand, surrounded by pyreflies. This is the ship where he started the game. The city looks alive, but there are no people. All these creepy, haunting noises in the background. 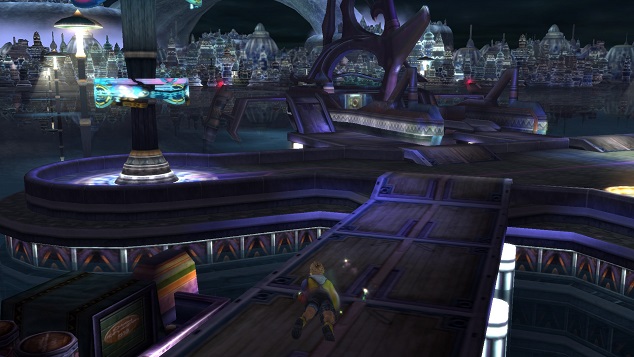 -This is some Silent Hill bullshit right here

-Hey, it’s that kid!! The Bahamut Fayth. Recounting how he knew about Tidus for a while. We’ve been seeing him for quite some time.

-The kid sounds more like an old woman now. Or not? I’m bad with voices.

-This is TRIPPY AF

-The others in the party are trying to wake him.

FAYTH: “It’s not that you’re dreaming. You are a dream.”

UHHH ARE WE ABOUT TO DELVE INTO SOME EXISTENTIAL FFVII STUFF?

-What could this mean? Is Tidus not real, just some creation of the Fayth/Sin/SomethingElse to stop Jecht!Sin?

-I want to visit Zanarkand so badly irl. I mean, assuming Sin isn’t an issue. Such a beautiful area.

-Fayth describes the old war between Bevelle and Zanarkand. Bevelle’s machina would’ve wiped it out. (Hm. For some reason, I’d always thought of Zanarkand as the place with machina, but it makes sense it Yevon is housed in Bevelle and Bevelle felt it had to atone.)

-The Fayth wanted to preserve Zanarkand. The remaining summoners all became Fayth for the summoning. Not Sin – “this place. A Zanarkand that never sleeps.”

-The dreaming Fayth created this version of Zanarkand. 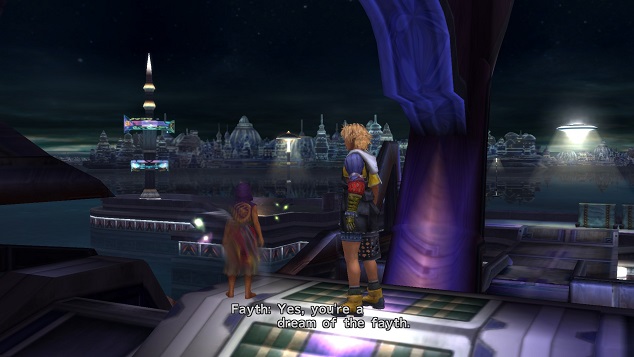 -Ok. Ok ok ok. So the summoners dreamed this version of Zanarkand, which included people, which included Tidus. But how did Sin invade the dream Zanarkand? Was Jecht a dream too? How is Tidus staying stable in the real world? Is Tidus like an aeon? What’s the meaning of Sin crashing into dream!Zanarkand?

[Later edit: another question came to me. What’s Auron’s role in this? What was his relation to the real Zanarkand? How was he able to move between the dream!Zanarkand and present!Spira?]

God, I have so many questions.

-The Fayth says that even Tidus’s father and mother, “everyone,” are dreams. Jecht too. At a certain point, what’s the difference between dreams and reality if they can have such impact?

-And is Sin a dream in the same way, or is Sin real?

-If the Fayth stops dreaming, all will fade. We start seeing these decaying, biological versions of Zanarkand. What I described before as a Silent Hill vibe only increases. 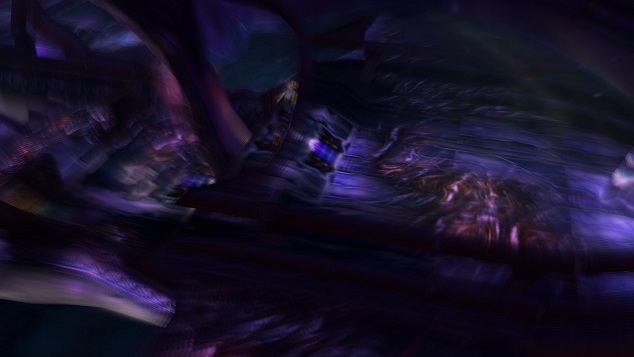 -The Fayth wants Jecht’s and Tidus’ help to rest. What does that involve? Dying? Becoming the dreamers?

-New theory: the act of dreaming and preserving the wonders of Zanarkand created an unintentional byproduct. Sin.

-…no. That can’t be right. If it were, they’d just stop dreaming and let the world rest. Unless they feel Sin is some kind of necessary evil?

-Jecht and Tidus are “more than just dreams now.” “Maybe you are the dream that will end our dreaming at last.”

-Fade to white. He wakes.

-Tidus doesn’t share what he learned with the rest of the party. Just says he’s ready to move on. 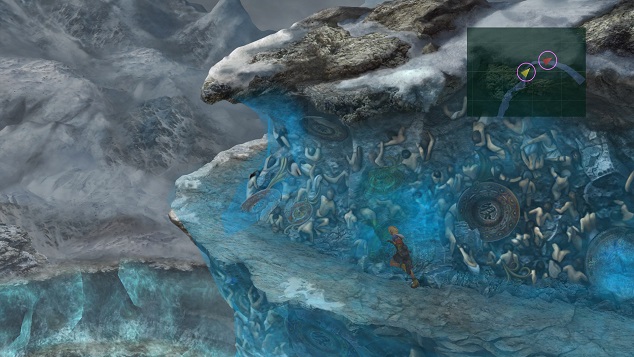 No no no. Bad Tidus. *whaps with rolled up newspaper* Be honest! Let the party help you! Or at the least, don’t conceal key information that could potentially help Yuna on her pilgrimage.

-We move from a Fayth Cluster to a Mountain Cave. 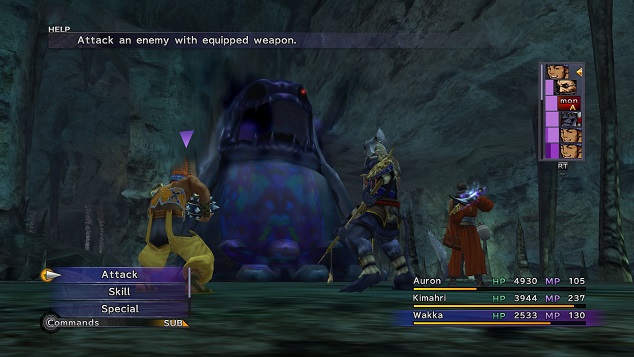 -It’s resistant to both magic and physical. I used Doom on it, which worked well for Kimahri’s rage. I’ll try Death when Kimahri’s overdrive isn’t fully charged. Stole a Star Curtain from it.

BANDERSNATCH
BASHURA – This is the only new one since last time. I assume it’ll count with the other Gagazet enemies.
GRAT
GRENADE
NIDHOGG

Next time: continuing through Gagazet.
Posted by Coldrun at 3:47 PM