Summary: The Besaid Aurochs win the second league season and the second tournament. I discover a host of new places to explore via the airship interface.

-Zazi Guado draws first blood with a regular shot. Just got wide open and dribbled like halfway down the sphere with no blockers.

-I’m trying to get Svanda (the player who’s dressed like she knows winter is coming) more involved. She’s low level. I’m not certain how exactly experience works in this game, but I get the sense that it depends somewhat on how many touches/actions a player has.

This second half will be a good test, since Svanda’s getting a lot of touches. 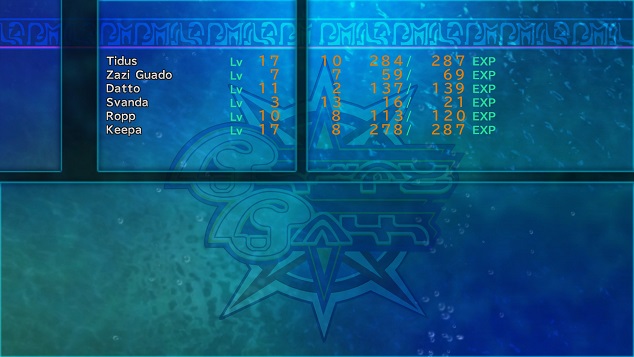 -Test successful. Svanda got a ton of xp. I like this strategy – no need for me to run up the score against bad teams. Get the lower level players involved and invest in long term improvement.

-Huge early advantage as I put the Al Bhed center, Linna, to sleep with a Nap Tackle 22 seconds in.

-Jecht Shot RIPS by the immortal Nimrook for a 1-0 lead! 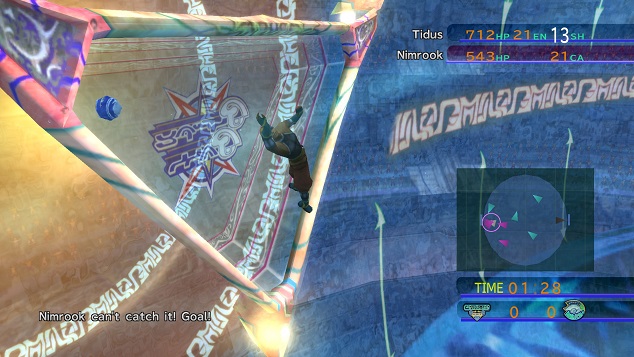 13 SH still remaining. Tidus is such a monster.

-Tidus has to be the most frustrating player to guard. He was in front of the net with three players on him. He broke past the first, knocked the other two away with the Jecht Shot, and scored. I’d be RAGING if I had to play against him.

-Ugh. These guys and their infinite endurance.

-I don’t know if this is intentionally built into the game, but the Fangs seem to be the only team with no foreigners. All their players are Ronso. It’s a nice bit of racial development – fits the vaguely benevolent xenophobia I feel from many Ronso.

-Tidus came into this game tied for the goal scoring lead in the tournament. I want him to win it so I’m feeding his Jecht Shots.

-I don’t know how the Ronso Fangs advanced this far. Their keeper just isn’t that good, and their only real positive quality that I see is how hard they are to tackle.

-Well, not quite. Argai Ronso is a really effective forward. 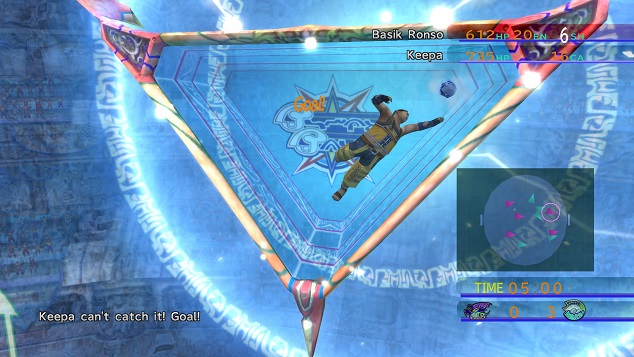 One of the few goals allowed by Keepa.

-Bad start to the second half as Svanda gets nap shotted, but no big deal. Tidus scores and resets it.

-Yay! 4-1. The Besaid Aurochs have won another tournament. (And still undefeated since I started using the Jecht Shot.) 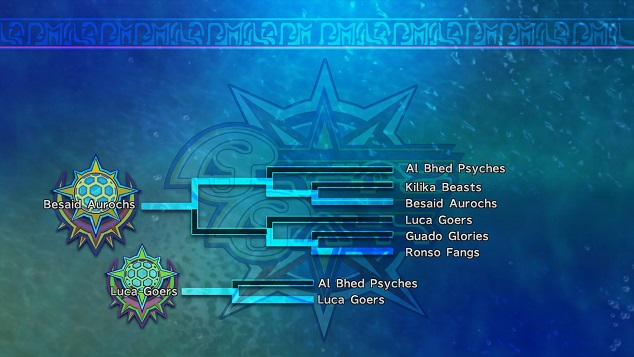 [Later edit: no doubt in my mind that the Jecht Shot is super overpowered. Fine and fun for this first run through, but on replay, I won’t use it.]

-I’m not sure what the Golden Arm is, but Zazi Guado couldn’t learn it and Tidus is all set with the Jecht Shot. I give it to Datto.

-Our team level increased to 5, and scout level to 3.

-One last game. Let’s see what Golden Arm is.

-Zazi Guado with an early goal. He’s so fast!

-Golden Arm is okay, but nothing amazing. It slows the rate of pass and shot point decay.

-2-0 win. The Goers kept pace with their own win, staying 3 points behind us.

-Jumped out to a 2-0 lead. I’m not super worried about losing that lead (this being Kilika), so I’m going to try getting Svanda and Zazi Guado more time.

-Trying out a new strategy also, one that works immediately. I gate Datto Nap Shot, and had him shoot as early as possible. Knocked Yuma Guado, the Kilika goalie, out.

-Yay! Svanda scored her first goal, from about halfway across the sphere. 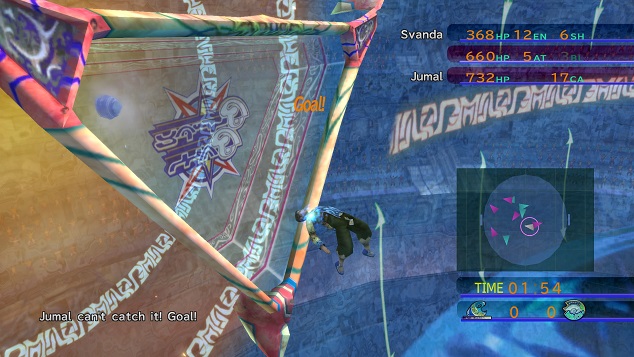 No keeper awake after all.

-Victory, 4-0. And Svanda is getting a lot of experience as I had hoped.

-We have a bit more of a cushion in the standings going into this game. About a five point difference between the Aurochs and the Goers, so a loss isn’t catastrophic.

-Opened up with the same strat as last time, a Nap Shot from Datto, and it works.

-lol. Svanda scored another half-sphere shot against a napping tender.

-Just noticed that Letty, an original Auroch, is now on Luca. I don’t blame him or anything – I let him go and he was free to join them – but still some cognitive dissonance to see. 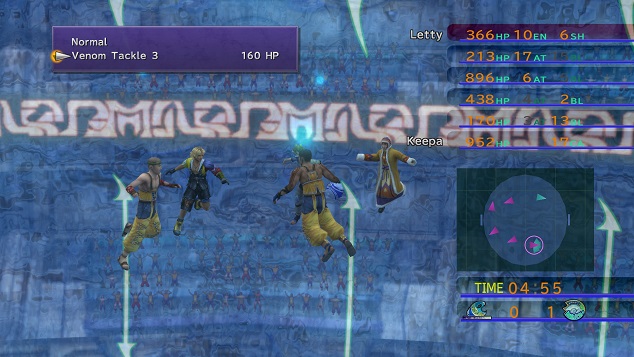 Tenacious d against our old friend and teammate.

(It also helps that he’s not very good. No regrets here.)

-I wish Venom depleted a percentage of a player’s health rather than a raw number. It feels pretty useless against high HP players.

-Can’t help but think back to that Jecht Shot mini-game. It seemed like a such a small thing at the time, and yet it’s had as much impact on my game-time as any other moment.

-It feels so cheap to open up with Nap Shot to knock the goalie out for an easy follow-up score. And yet… so satisfying. 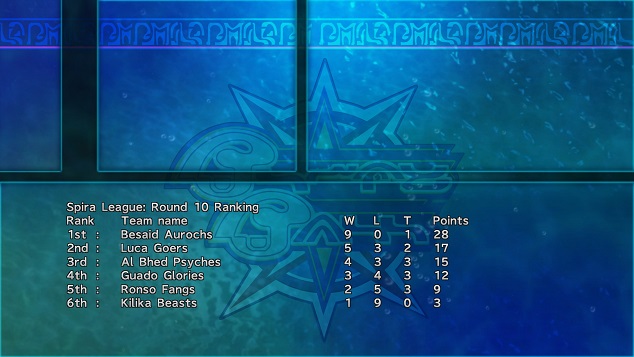 -And not just for the game. We win the league handily, going undefeated. Return Sphere for a reward.

-Done for now. And with the exception of maybe a goodbye-game at some point, I think I might be done for the rest of FFX. Two full league seasons, two full tournaments – I think I may have gotten my fill. (Though I of course reserve the right to change my mind later. )

-I head back to the cockpit. Rikku and Wakka have been brainstorming. Did they come to the same conclusion as Kimahri? 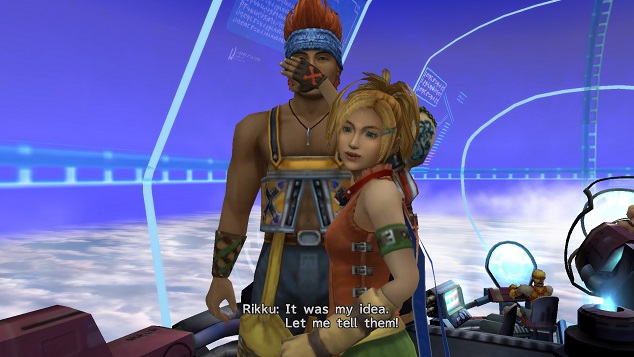 -VERY INTERESTING. They think the key is in the Hymn of the Fayth. They think it was the hymn that led Sin to listen peacefully back in Macalania.

-So what’s the plan? Tranquilize Sin with the hymn and then do some sneak attack while he’s distracted? Sure. But what kind of attack would work even then? I don’t get the sense that Sin has some soft chewy underbelly that we poke and he explodes.

-The world opens up now. We can go anywhere, to any destination. 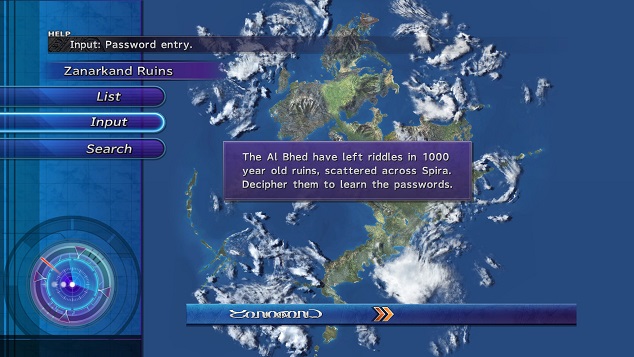 -Al Bhed riddles too? There’s no way I’ll find all this, but I’ll take a decent first crack at it anyway.

-The last new thing on this interface is a free-roaming search. I just spam clicked around and found “Battle Site,” which was added to the airport destination list. A secret! 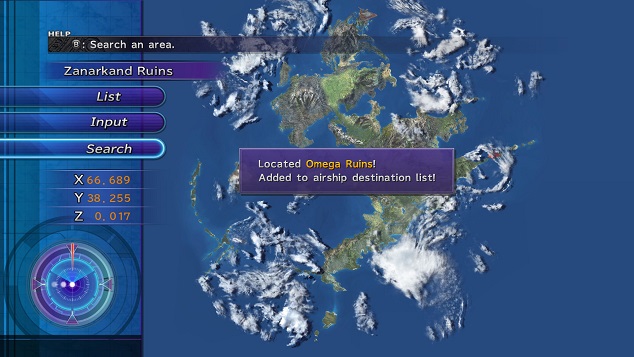 NO FUCKING WAY A SUPER BOSS DOESN’T LIVE THERE

-Found the Sanubia Sands. If I had to put money on it, I’ll bet I find Cactuars there. Maybe even the mustachioed cactuar if fate smiles upon me.

-Wow. Wow wow wow. We got some options. Highbridge was my next destination before I started exploring that open search, but I think that’s the critical path that may lead to Mika and Sin. Could be a while, or could be immediate. I just don’t know and so I want to explore Highbridge last.

[Later edit: the only negative I see here is that the method of discovery, clicking all over this map, isn’t all that satisfying. One of the few times I think an overworld to explore myself would’ve been significantly better. The gold standard imo is the way FFIX used chocobo hunting to lead me towards the Chocobo’s Air Garden and Chocobo’s Paradise.]

Next time: Calm Lands to get a sense of how many captures I have to make per zone to complete things, and then the Cavern of the Stolen Fayth to try my luck again with Dark Yojimbo.