Summary: Finishing off the secrets in the Besaid and Kilika temples. Saying hello to some old fayths. Anima. Magus Sisters. Farewell to Belgemine.

-Something that I thought of in the shower this morning: what if the first statue on the Mi’ihen Highroad is now activated in some way that would transform my No AP weapons?

-Another thought, something I’ll try on Rikku’s Godhand: what if I get the No AP to go away by filling in the other slots of the weapon?

-You know what, I feel the end of the game coming up fast on me, so fuck it. I’ll try it now.

-Side note: I really wish there were a faster way to scroll down the list of equipment in the customization and vendor screens. It takes a long-ass time to get to the bottom. I just timed it with a stopwatch. It took 25 seconds to reach the Godhand. 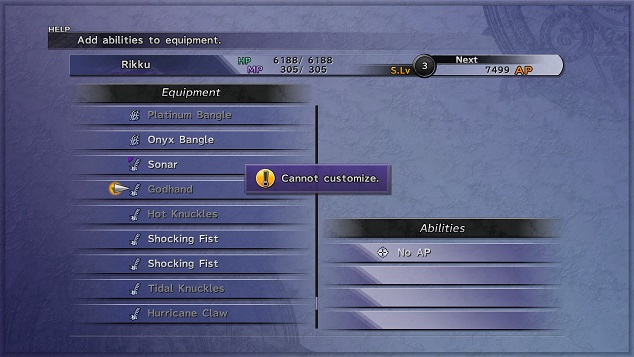 -Never mind on the second idea. Can’t customize it.

-Everyone aboard the airship is emphasizing to check that I have what I need, that the final battle is coming.

-The main gun is done for.

-Whoa – I’m not locked into endgame yet! I can still go places on the airship list. This is really pretty shocking. I was sure that it was final boss or bust.

-Mi’ihen Highroad to start out. The dialogue around here is changed too. Someone at this Travel Agency says that singing the Hymn convinced him to rejoin the Crusaders, to try doing his part. 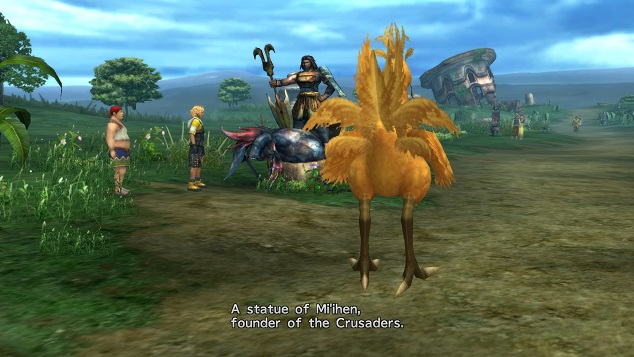 Enjoy a faceful of chocobo butt.

-The statue of Lord Mi’ihen is just as it was. Ah well. Was a good idea!

-Because I’m a glutton for frustration I returned to Remiem Temple. That pink door behind Belgemine is still sealed “by a strange power.” Grrrrrrr.

-Tried the chocobo race at Remiem Temple a couple of more times and learned that if I open chests and hit poles and still win, I get extra stuff. But that’s not the most interesting thing. I noticed this time that there’s a sphere at the foot of the opposing chocobo at the start!

-Oh. Never mind. It’s just the instruction sphere about the race’s rules, not another Jecht sphere.

-OOH A THING I THOUGHT OF A THING!!! Maybe now that Mika called off the dogs and is spewing new story about us, we can get in places we couldn’t before! First trial spot: the Besaid temple. Hopefully the warrior monks won’t still be after me.

-Still can’t walk down the middle path from the save point just outside Besaid Village.

-YAY I CAN NOW GET INSIDE THE TEMPLE!!!

-OH MY GOD I CAN GET INSIDE NOW

-I CAN GET INSIDE

STOP LOOKING AT ME YOU JUDGMENTAL CAT

-Let’s see if the Valefor chamber is any different. We can walk in.

-a thing is happening 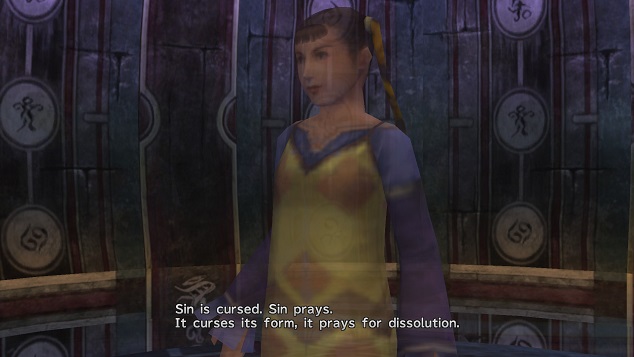 -It’s the woman who’s aeon form is Valefor! She appears.

-This is some creepy shit, about Sin’s endless cycle.

-“Free him from Yu Yevon. Free him – the fayth that has become Sin.” She must be talking about Jecht.

-Got an Evasion Sphere. And there are treasures all around. Potions, a White Magic Sphere, an elixir.

-Back to the Chamber of Trials. This is deeply frustrating me. I feel like a Destruction Sphere should be lying around here and I’m not seeing it. 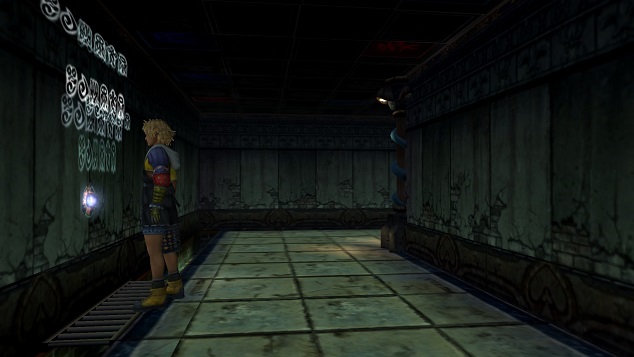 -When I stick the Besaid Sphere into this side wall socket, words light up. A thing happens. But it doesn’t do anything special. Nowhere else is accessible. FHDJKLSFH

-I dunno what to do. Stuck. Moving on. Let’s try the Kilika Temple.

-lol I suck at this. Trying this chamber of trials again and just can’t remember how to get past it.

-Got the Destruction Sphere. Now the question is: can I use it? 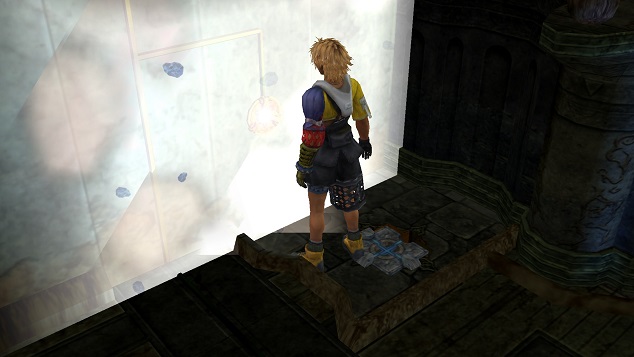 -JACK FUCKING POT!!!! GOT THE RED ARMLET!! Fire Ward, Ice Ward, and Lightning Ward. Not great at this point, but mostly happy and feeling hopeful that I might be able to reach the secret aeon in Baaj Temple.

-Into Ifrit’s Chamber of the Fayth. 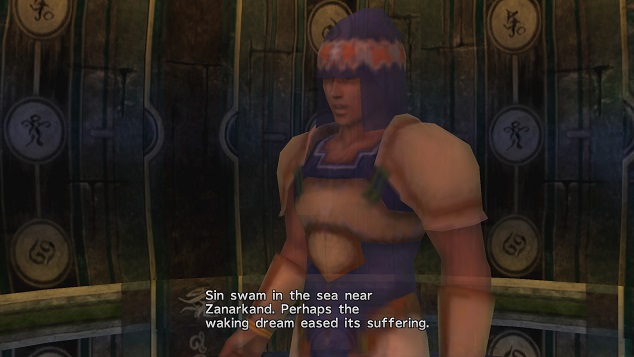 -I LOOOVE that I’m getting to see all the human forms of the aeons.

-When Jecht touched Sin, he became real. So perhaps there’s hope for Tidus yet.

-On the sphere grid, just teleported Lulu over to Holy. Now she has that and can start working her way down Yuna’s tree.

-I was here before but quit without saving. The upside is that I get to watch Wakka and Tidus have the bro-est of high fives.

-Geosgaeno goes down super quickly at this point.

-Came back here because I can’t 100% remember whether I’m still missing a temple’s secret or whether I found them all. This is to check. 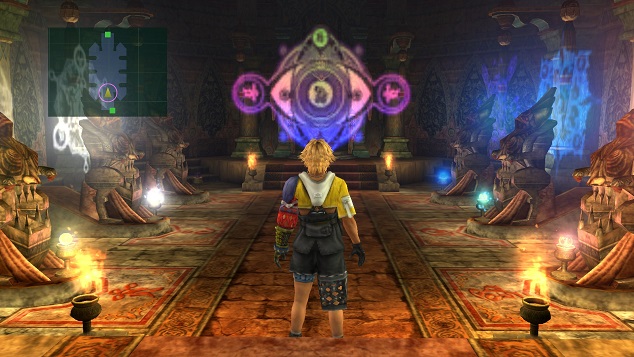 -The spheres that light up here are fire (Ifrit), light/holy (?), lightning (Ixion), blue stuff/ice (Shiva), dark blue (?), and the purple is unlit.

-I found the destruction sphere. My mistake before was that I thought the glyph sphere used to open the door down here was lost forever, but I could still remove it from the open door. 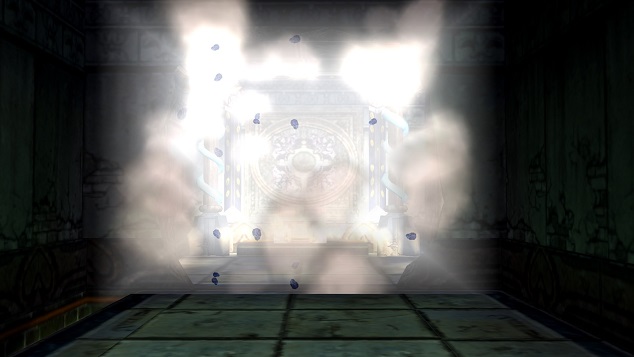 -Got a Rod of Wisdom. Magic +8% and Sensor, which would’ve been nice at that early stage of the game.

-I can’t begin to say how much of a sheer RELIEF this is! This Destruction Sphere has been bugging me since… *checks my archive* August 22nd. That was when I posted my Besaid Temple session, Summoner’s Trials, and when I got angry at not having the chance to use the Destruction Sphere.
http://coldrungaming.blogspot.com/2016/08/ffx-par...

A three-month itch is finally scratched.

-Anyway. I plan to revisit each fayth and talk to them, culminating in that wall of fayth, but for now I want to see what’s behind the magic door of Baaj.

-Some quick predictions at what this could be, in order of how likely I think it is:

1)Magus Sisters. I know they’re out there in the world lurking since I saw their dark version.
2)Leviathan. We’re underwater in this temple and haven’t seen Leviathan yet in FFX.
3)Something new in the series. (I’d be shocked if it’s something goofy like the Brothers from FFVIII.) 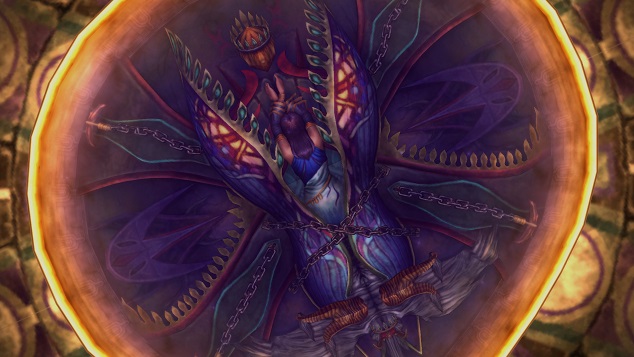 -Who is this woman? Super familiar and I can’t quite place her. What was she doing turned into a chained beast? 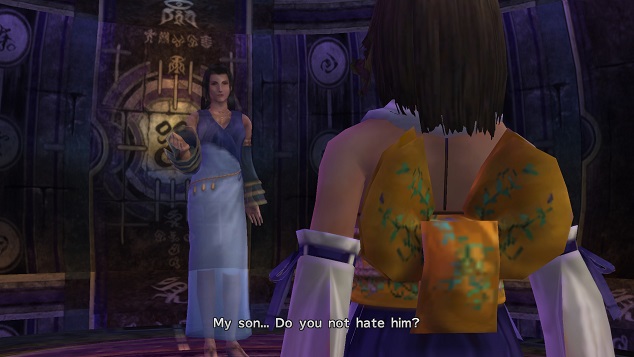 -SEYMOUR, YOU CHAINED UP YOUR OWN MOTHER AND USED HER AS YOUR AEON???

-I frigging love her voice actor.

-Ah, she gave herself willingly to him. But that self-sacrifice just gave him a taste of power that turned into an obsession with Sin. 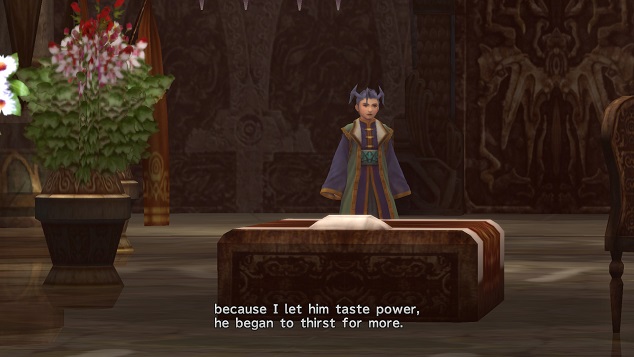 -That’s just… so fucked up. So fucked up. The tormented hellbeast is Seymour’s mother – and it sounds from talking to her like the one who torments her is herself, not Seymour. She blames herself for letting him grow into the man he grew into. She punishes herself.

-There are two more things I want to do this session.

-First, I have to try out Anima.

-What an epic summoning animation.

-When she comes out, Yuna says: “I will share your pain with you.” She’s the best.

-Her special attack is Pain, that causes “Death.” Whew. Wow. 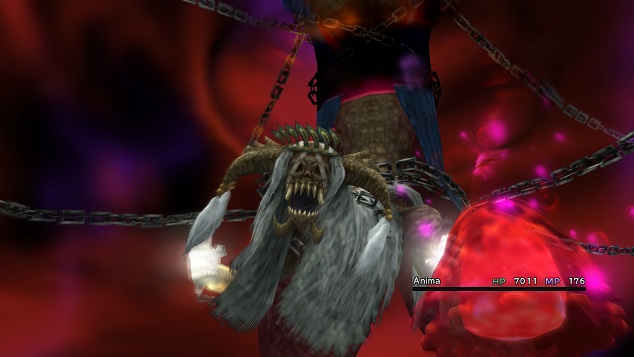 -It’s Oblivion. First of all, we see that her design is like Ultimecia’s final form in FFVIII where she has another creature upside down beneath her. That creature emerges, breaks its chains, and pummels the shit out of the poor Fire Flan I tested this on. It combines that with a blast of dark magic.

-So that was the first thing. The second thing I want to do is now fight against Anima in a Belgemine duel and try to beat her. Maybe that opens the pink door in Remiem Temple?

-Although I doubt it. I’ll bet that seal opens when I’ve caught all the main aeons and beaten them through Belgemine. Even with Anima, I feel pretty sure that the cactuar aeon is what’s behind the Bikanel sandstorm. Still can’t reach it.

-Btw, ever since I added Auto-Haste to Tidus’s weapon, he’s become an unstoppable buzzsaw.

-OH GOD I JUST THOUGHT OF SOMETHING

-As Belgemine’s Anima arose, and I saw the hands around her neck again in the context of her story, I wonder… what if those symbolize her son choking the life from her? Not literally, but since Seymour is the source of so much guilt and pain, and those are the thin hands of a child, I’ll bet there’s a connection.

-Using Grand Summon on Bahamut. This might end things quickly. 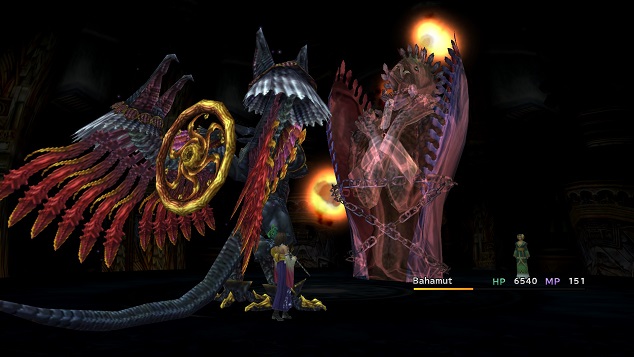 I’d watch the hell out of a movie about this kaiju battle.

-Belgemine gives us 60 Stamina Springs as a reward.

-It’s a two-step process. The Blossom Crown breaks the first part of the seal. The Flower Scepter breaks the second part.

-Got Cindy, Sandy, and Mindy! I’m a bit surprised/disappointed that there was no conversation or animation, but not THAT disappointed. I now have a goofy bug trio. I’ll take it.

-I love seeing how each fayth tableau is laid out. Respectful and grotesque, like something from Hannibal. 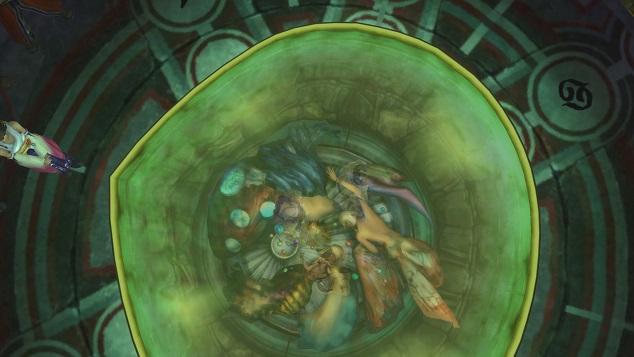 -Hm… I don’t quite know what this means.

-Ah. They wish they hadn’t dreamt, but had just passed on and moved on.

-Their summoning entrance is phenomenal. We see three colorful seeds flying through the air. The seeds land in the ground and plant themselves. They emerge as flowers, and the flowers transform into the sisters. 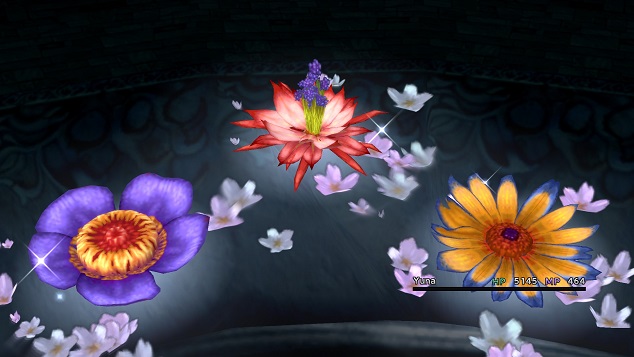 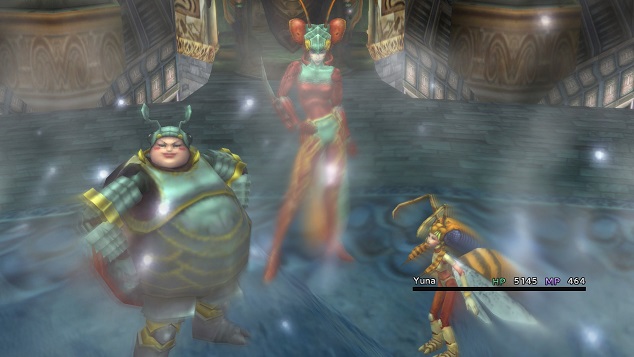 -Anima just obliterated the sisters. They had no hope.

-She gives a little “the student has bested the teacher” speech. I guess there might not be a cactuar anima out there. 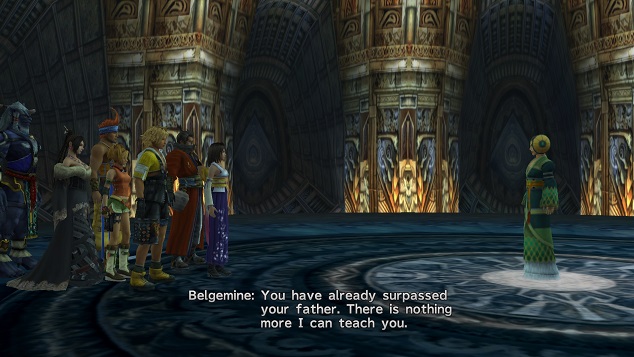 BELGEMINE: “My work here on Spira is done. Time for me to go.” 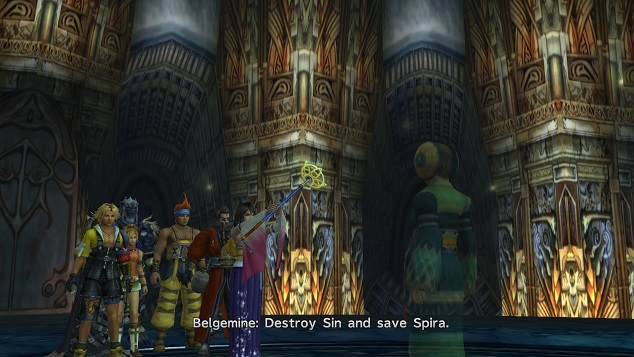 -Got a Moon Sigil. What the HELL are these for? I mean, I know they’re celestial tokens for the super weapons, but… how do I find it use/upgrade them? [Note: this is definitely still rhetorical. I hope to uncover the answer as the game wraps up, though I’m not as confident anymore.]

-I feel like an especially big goober about this, like I’m missing something major, because this is the Moon Sigil. I already had the Moon Crest. That makes me think I was supposed to do something with the Moon Crest a while ago and now the Moon Sigil is for that mystery thing’s next upgrade.

Next time: Trying out the Magus Sisters, and continuing my second pilgrimage to talk to all the fayth again.