Summary: More of me getting obliterated in the Calm Lands Arena with one near-victory. Nirvana. Following ancient Al Bhed messages through Calm Lands. Godhand.

-It feels like there’s so much to do in this game, and I don’t want to forget. Quick list of my next things:

-Getting my party set and equipped. I don’t know what awaits me inside this treasure chest, and if I had to guess, I’d say “horrible bitey monster.”

-I was wrong. I got a thing called Nirvana. 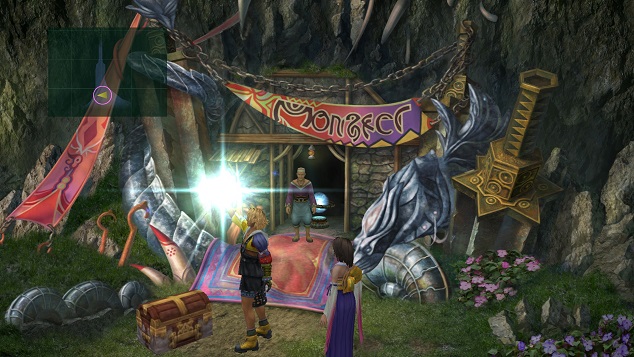 During the chest opening, Yuna walked up to Tidus and clasped her hands as if in thanks, so I’ll guess it’s a Yuna weapon.

The item has one ability and three empty spaces. The one ability is “No AP.” AP I’ve only seen as a good thing, or something I trade off, like where one of Tidus’ items gives him extra AP for no overdrive. How is a “No AP” item possibly good?

I checked the in-game reference that lays out all the auto-abilities and can’t find it anywhere. Nor under command abilities. Huh.

-Gonna test it out. Right now, Yuna has 956 AP until her next sphere.

-After a fight with a couple of Chimera Brains, she got no AP. Again, why would I want this?

-Theory: maybe it makes it so she doesn’t get AP and the others get more? But that doesn’t make sense. It’s not like characters split AP, so I don’t see why her getting less AP would leave more for others.

-OOH I JUST THOUGHT OF A THING!! The moon and mars and whatever crests I got are Celestial Tokens. Maybe I start with this crappy Nirvana use a crest to make it not crappy.

-Tried activating the crests by clicking on them in key items and nothing happened. Hm. I’ll keep my eye on this.

-Anyway. Back to the arena dude. Time to for an ass-whoopin’.

-He gave me 99x Chocobo Wings before the Thunder Plains beast fight. [Later edit: at some point in the near future, I'm going to go through all these new inventory items to see how to use them. Probably before I try the Omega Ruins.]

-Hi, Cactuar King! It’s cute and tiny and doesn’t have a mustache in this game. 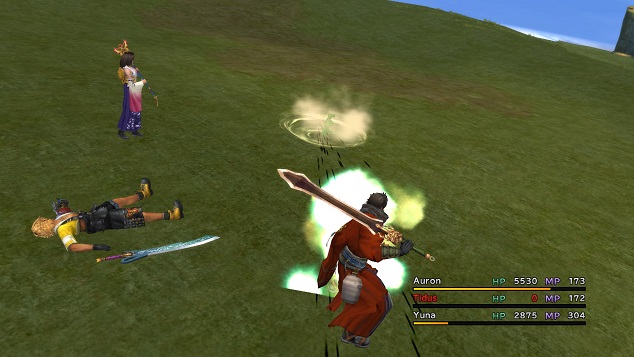 -Next up is the Mushroom Rock Road beast. Got 99x Candle of Life. 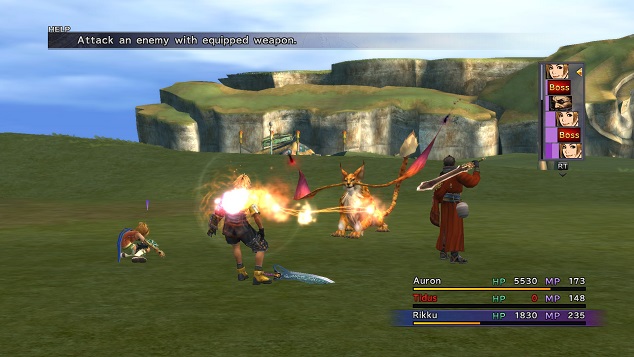 -Pretty kitty! Queen of the coeurls.

-She has an auto-death ability, Hyper Blaster. Let’s see if Yuna’s Deathproof bracer defends against it.

-She keeps trying to cast Chaos on Auron. His ribbon reflects it.

-Note to self, if I try this or other big fights again: take off the Slayer and Victor overdrive modes. No gauge build-up sucks.

-This fight’s been going a while. She has a TOOON of health.

-She used Drain! Does that means she’s low?

-FUCK FUCK FUCK. Got hyper blastered down like 10 minutes into the fight. That was ridiculous.

-I had gotten into a rhythm. Yuna to use Life, Auron and Tidus with Ribbon to protect against Chaos and whack away. It was going fine until the end, but then she started draining us and one-shotting us. I didn’t really see a path to victory. 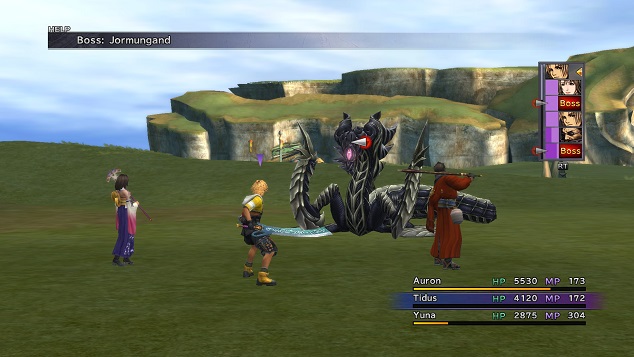 -It cast something called “Space Time Vorpal” that did 9999 to all of us and we died. Lol.

-Next up is Macalania. Shining Gem x60 for us. 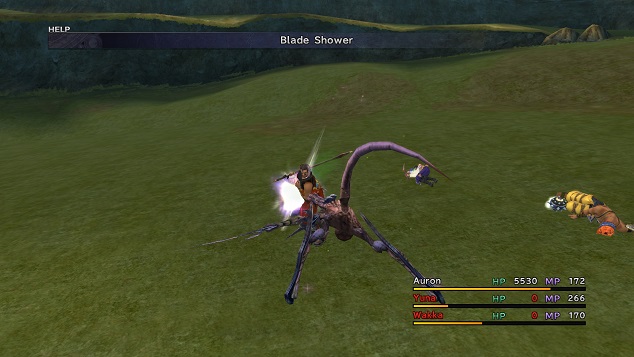 -It has an HP draining attack called Hades Claw.

-Aaaand a bunch of other attacks. Dead. At least the arena master is paying me before he sics his hellhounds on me.

ARENA DUDE: “I’ve done it! I’ve created a monster! What a fabulous day!” He then gives me Door to Tomorrow x99.

-Do I want to fight it? Sure. Why not. How hurt could I get? 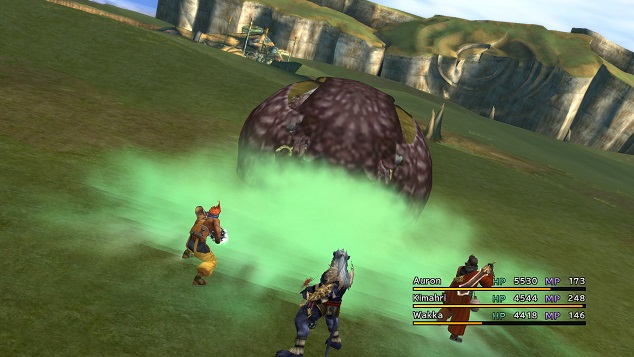 It starts the fight in a cocoon of some sort. If it’s like the Catastrophe from FFV, maybe it’s a giant eyeball monster underneath.

-It obliterated me with something called Toxic Cloud. I didn’t even get to see what was inside the shell.

-Well, that’s all the death this guy can inflict on me for now. I can’t wait to collect more beasts for him to destroy me with!

-I was walking around trying to remember where the chocobo rental was so I could reach Belgemine, when I saw something that sparked a memory. A giant thorn by a canyon, like the Al Bhed message on the Highroad told me about. 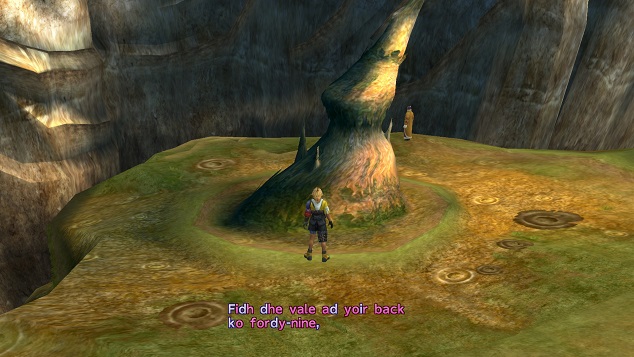 “With the vale at your back, go forty-nine, then seven to the right in the truest line.”

-I assume this treasure hunt means to go forty nine steps from this thorn. Let’s try this.

-I thought I did it right. It took me to an empty patch of land and nothing happened. Trying again.

-Went back to that spot, and nothing. Tried wanding a bit in the area and found a piece of ruin with another message. “Right sixteen and right four.”

-Tried it once and it took me in a weird direction. Tried again with my back to the vale, and it got me closer. Another message. 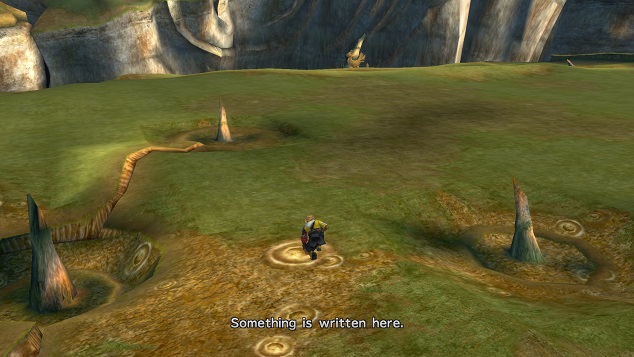 -At another thorn nearby, another note: “With me at your back, go twenty, then twenty to the right.”

-Didn’t seem to help much. Most of this is just me wandering around looking for landmarks in the general area of where the directions tell me to go.

-Ok. Back at the “Continue on. Find me” message. I roll with it. It points me back to the starting thorn. 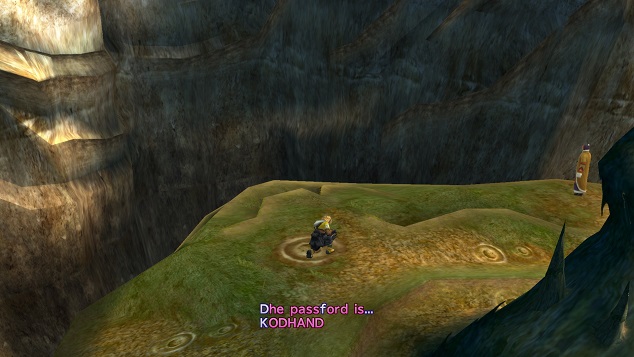 -Look, Belgemine. I’m sure your temple is awesome and important. But I’m ending this session by trying that new password out in the airship. You’ll be next time.

-I found the family from Macalania at the Rin’s Travel Agency here. Hi, guys! Eternally grateful to your kid for getting me the Celestial Mirror.

-Saving before I go forward. I’m a fiend about saving since I started running into dark aeons. 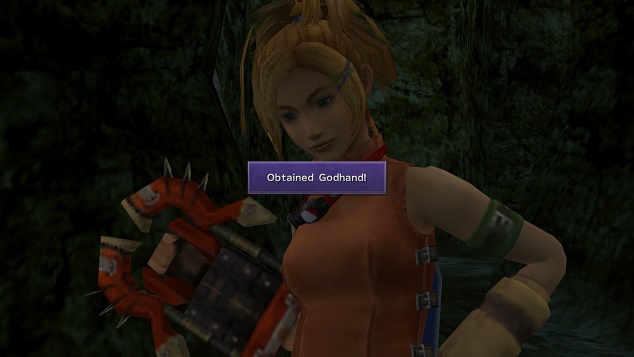 -It’s another weapon with “No AP.” I’m certain now that this is somehow related to these Celestial Tokens. Just not sure how yet. My best guess is that it’s something I’ll come upon as the story progresses – or even just as I explore more.

-oh btw I just checked and I’m EIGHTY FIVE HOURS IN WTFFFFF – how has this game sucked me in? I would’ve guessed maybe 50. The time has absolutely flown by.